Birds of a Feather: Writing about Home & Migrations 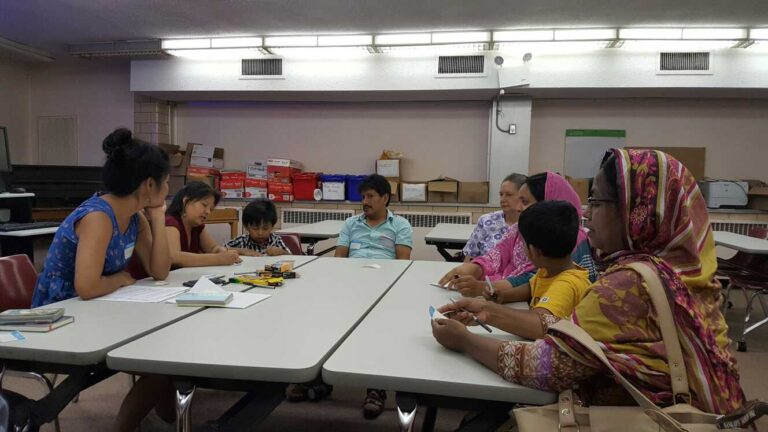 Memories of Migration is a library-based community memory program led by the Santa Ana Public Library and Historypin that builds community connections and cultural heritage collections around the stories of migration in America.  In diverse communities with rapidly changing demographics, libraries are at a cultural nexus, and also one of the core providers of free services; safe after school space, Internet access, English lessons, pathways to citizenship, and digital literacy. Memories of Migration compliments and celebrates the vital role that libraries play in the lives of immigrant families and invites community members to share their cultural heritage and make it part of the fabric of local memory.

Queens Public Library is one of the partner libraries participating in this IMLS-funded initiative.  With a focus on inter-generational and cross-cultural dialogue, the Memories of Migration initiative provides engaging programming and a unique set of tools to help librarians and staff work within communities to record and celebrate our diverse backgrounds and histories.  Studies show that collaborative cultural programs like this one are creating stronger communities and reducing implicit prejudice.

Our target audience is made up of individuals and families with experiences of immigration. Through this interactive writing workshop, participants wrote and shared their personal stories while exploring the ideas of home and migrations. Because the workshop was conducted in English, participants were required to possess a minimum level of fluency in English, often a second or third language for them.

How the participants were reached or discovered

The event flyer was posted at the Jackson Heights Community Library. The event was open to individuals and families with an interest in writing and sharing their personal stories. The session was conducted in English. However, registration was required by phone or email to ensure we have enough space reserved for interested individuals.

How was it done

Muna Gurung, the facilitator of this workshop, showed participants multiple photographs from the Archives at Queens Public Library and asked them what questions and details they could construct from their observations. Using another photograph from the Archives, Muna asked the participants to write a short story about the picture within a time limit, using the similar questions and details they brainstormed in the previous exercise. Muna also gave tips on how to incorporate the five senses into their writing to enhance the quality of their stories. Participants were asked to share their writing. Muna also gave participants a section of the “I Remember” poem by Joe Brainard. Participants took turns to recite the poem and were asked to write their own three-line “I Remember” poem and story based on their childhood memories, migration stories, or the photograph they brought to share with everyone.

At the end of the workshop, the Queens Memory team helped to digitize the family photographs participants had brought in.

Participants learned how to write stories and poems based on their personal pictures and memories using the ideas and tips Muna offered through this workshop. One of the participants’ favorite writing exercises was to use Joe Brainard’s epic poem, “I Remember,” as a structural tool to recall memories, secrets, and stories. The writings from the workshop was posted on the KathaSatha website.

One participant from the workshop later also joined the Queens Memory as an active volunteer in conducting and collecting oral history interviews of Hispanic immigrants in Queens.

Some of the photographs donated to the Queens Public Library digital archive are the following:

Participants were very creative with constructing their stories and poems. Writing about their migration memories and experience sparked the participants’ interest in learning more about their own heritage and family history. This workshop also encourage participants to learn more about the history behind the photographs from the archives. Archival photographs can be great teaching resources for writing workshops. Hosting a storytelling or writing workshop like this also encourages people to be part of their local history through their contribution to their local archive while giving people an opportunity to share their experience and stories with others.

Muna Gurung is a writer and educator based in Kathmandu, Nepal. She received her MFA from Columbia University, where she was a teaching fellow. Her fiction, non-fiction and translated works have appeared in The Margins, Himal Southasian, Words Without Borders, La.Lit, PIX Quarterly and No Tokens. Muna was a 2015 Asian American Writers Workshop Margins Fellow, and is the founder of KathaSatha, an organization that fosters a public writing and storytelling culture in Nepal and New York. We met Muna at a street fair where she was collecting local stories on post it notes and began coordinating for this writing workshop through our email communication.

Richard Lee and Yingwen Huang were the Queens Memory team members who helped to coordinate the workshop and assisted participants with digitizing their family photographs.

The planning for the workshop was developed through a series of communication over the phone and lots of email exchanges.

During the initial phone meeting, Muna proposed a writing workshop involving pictures and writing exercises that can help participants write about their own experience. Muna came up with the title and the description of the workshop in our follow up emails.

Confirmed location, date and time with all parties.

Queens Public Library produced the flyer for advertising. Flyer was posted at the Jackson Heights Library. The Branch Librarian, Mr. Dai, also spoke to the ESOL students about the workshop during their class. Muna also posted details regarding the workshop on her social media platforms. Queens Memory began accepting registration by phone and email.

During this period, Muna created a lesson plan for the workshop and selected a few photographs from the Queens Public Library digital archives to complement the writing exercises.

The Queens Memory staff prepared outreach materials, the scanning for digitization, and other necessary supplies for the workshop.

July 29
Day of the workshop